The Digitech Trio+ Band Creator with Looper is, as the name suggests, not only a Loop Station, but a device designed to simulate an entire backup band, so guitarists can play solos. How well does this actually work and is the device a good buy for someone who primarily needs a looper? We'll tell you about our experiences in this review. 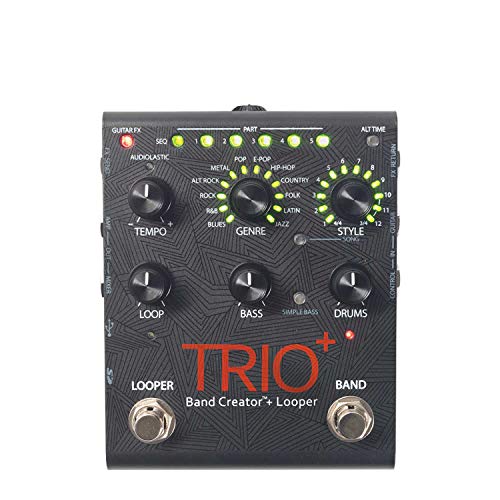 The Trio+ Band Creator comes in the shape of a stompbox measuring 13.7 x 10.7 x 6.3 cm, and has a low weight of only 660 grams. The device has a metal case with two foot switches and various small knobs and dials; it uses a 9 V DC power supply included in the delivery. Unfortunately, battery operation is not provided for the Trio+ Band Creator.

Even though it's very compact, the Band Creator offers a wide range of connections that you won't be able to find on many other entry-level loopers. On its left side of the device has an output for connecting your amplifier, on top of an additional output - e.g. for connecting a mixer. On the right side, there is a large jack for your guitar, as well as another one for connecting an external foot pedal to select song parts while standing up.

Very useful: The small jack output for headphones on the front side has its own volume control.

All in all, the device offers the following connection options:

Due to the two separate outputs, the Band Creator can handle true bypass, meaning that you can send the output signal of the backup band directly to a mixer while the guitar sound is passed on to your amp. Via FX loop functionality, there is also the option to loop your effects devices directly into the loop by connecting them to the Trio+'s Send and Return connectors.

The Band Creator has twelve musical genres, each divided into twelve different playing styles either in four-four or three-four time. You can choose out of the following genres via a dial in the centre of the device:

In the Band Creator, each song can consist of five different parts, while you can also program the playback order via a sequence button. One of the special features of the Trio+ Band Creator: The device doesn't just play predefined rhythms, but creates individual rhythm patterns after a learning phase, which fit exactly to whatever you played as well as the selected genre.

In addition to the rhythm features, the Trio+ Band Creator also allows you to add a guitar effect when you activate the illuminated GUITAR-FX button at the very top left of the device. There is a fitting rhythm and solo sound for each style. In case you want to use your own effects units instead, you can easily include them via the Trio+'s FX Loop using Send and Return.

By the way, the complexity of the backup band's bass track can be toggled via the LED switch with the name "SIMPLE BASS" that is located between the volume controls for bass and drums. The Band Creator allows you to select three different levels of complexity, ranging from extremely simple to sophisticated.

With the Trio+, your songs are stored on the included 8 GB micro SD card providing space for up to twelve songs with loops. If you need more memory, you can simply replace the SD card with another one, which theoretically means unlimited memory. The device supports micro SDHC cards (class 10) ranging between 8 and a maximum of 32 gigabytes.

By the way, recorded songs can not only be saved on the SD card, but also backed up and played via a PC or Mac using the USB mini-B port and the software provided by the manufacturer; updating the firmware is also possible via the USB port.

The Trio+ Band Creator as a Loop Station

The integrated looper can be activated by pressing the LOOPER foot switch on the device, and you can use it both with and without the digital backup band. On top of the initial recording, the looper supports an unlimited number of overdubs. You can adjust the loop volume with a knob especially for this purpose.

According to the manufacturer, the device is capable of recording loops to up to 230 seconds at 50 BPM. You can adjust the speed of your song using the tempo knob, and this also works with previously recorded songs via time-stretching.

To start the loop, you either have the option of pressing the LOOPER foots witch when you start playing, or pressing the foot switch first, after which the loop will start playing automatically as soon as you hit the first note. The device also offers the possibility of counting in the beat before you begin recording.

The coloured LED lights under the LOOP knob indicate which mode the looper is currently in. The first recording of a part is indicated by a red LED light; for overdubs, the LED is illuminated in orange.

If the looper is not in the record or overdub mode, pressing the LOOPER foot switch for two seconds will erase the entire loop and also restore it if you might get into this kind of situation accidentally.

Overall, the Band Creator offers the features of a Loop Station you'd expect from an entry-level unit, and it also goes nicely with the unit's digital backup band. We also thought the option of connecting external effects devices via an FX loop to be amazing, and we liked that the unit can be used for practicing without an amp using the headphone output thanks to integrated guitar effects.

Operating the Trio+ Band Creator is not very complicated, but we didn't find it to be necessarily intuitive either. In the beginning, it requires some time to get familiar compared to other entry-level loopers. This is certainly not least due to the sheer amount of setting options of the device. Once you have mastered this learning curve at the beginning, however, the handling during operation is no longer a problem.

Digitech's Band Creator is operated via numerous LED buttons, several knobs and two foot switches. Unlike some of its competitors, the device does not come with a LCD or LED display. Our main concern was that the device itself has only two foot switches meaning that it's not possible to do all settings while standing. Digitech offers a separate foot switch, the FS 3X, which can be used to extend the standing operation.

The user manual of the Trio+ is detailed and easy to comprehend. Digitech also provides a Quickstart Guide for a faster start.

The Digitech Trio+ Band Creator is a backup band in a can that's fun to use for both home practice and small-scale solo performances inviting you to write your own songs. We found the sound of the Trio+ to be perfectly fine for an entry-level device, even if you probably won't want to use it for the studio. The looping feature is rather simple, but should be sufficient for most beginners.

What we particularly liked about the Trio+ Band Creator is the fact that the looper and backup band work well together. The included memory for twelve songs is not abundant, but the expandability by using additional SD cards is, in our opinion, a pretty amazing aspect that hardly any other device offers. We also enjoyed the two separate outputs for amplifier and mixer, as well as an additional headphone output with a separate volume control.

Another highlight for a device in the entry-level segment is undoubtedly the FX loop, which you can use to integrate external effects devices. Operating the device is not completely intuitive, but with a little exercise it is not complicated either.

Overall, the Digitech Trio+ Band Creator is a good choice for guitar beginners looking for both a looper and a useful rhythm device. At around 170 Euros (as of March 2021), the device offers a good digital backup band you can adjust in many different ways.