Easy to Use Looper for Beginners

In a previous review, we talked about the TC Electronic's Ditto looper. Following the Ditto, TC Electronic has recently released the Ditto+, that is adding some useful new features, but is generally committed to the minimalism of its predecessor. Is it worth the trouble and additional cost of £30 to £40 to get the new Ditto+ instead of the still available predecessor model? Read our review to learn more! 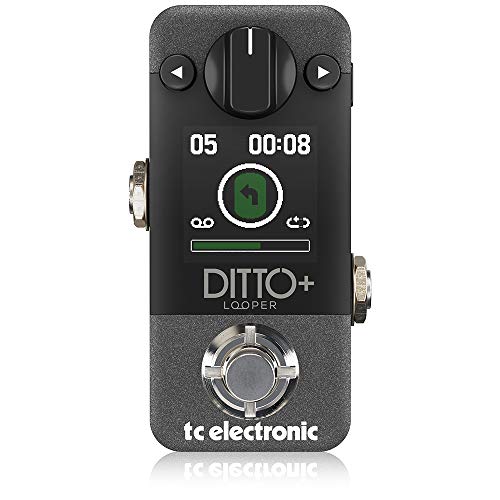 Same as the Ditto, the Ditto+ is the size of a very compact stomp box, and "compact" is really no exaggeration: The Ditto+ measures merely 4.6 x 9.2 x 4.2 cm and weighs less than most smartphones making it fit on just about any jam-packed pedalboard and probably swim in your guitar bag.

The most striking new feature of the Ditto+ is the 2.6 x 2.6 cm colour display, which makes it much easier to use. Underneath its case, the Ditto+ hides another very welcome new feature, namely a memory for up to 99 loops and a total of one hour recording time in 24-bit quality without loss. Providing this additional memory, TC Electronic fixes one of the biggest shortcomings of the Ditto+'s predecessor model, which not only had no memory at all but gave you only five minutes of audio recording.

Another great point about the Ditto+ is the fact that it supports true bypass. So, whenever you're not using the looper to record a loop, the device transmits the audio signal completely unaltered in input quality without converting it from analog to digital and vice versa. We also really enjoyed the extended loop feature. When activated, it automatically extends the length of your loop in case of recording beyond its original length during an overdub.

The case of the Ditto+ seems to be quite sturdy and, as with its predecessor, of high quality. Apparently, the low price was not achieved by sacrificing quality, but by letting go unnecessary connections and features.

Not only the case of the Ditto+ is tiny, but also the number of available connections. TC Electronic gave its half pint of a looper only the absolutely necessary ports: an input and an output, each as a large 6.3 mm jack, as well as a USB port and, of course, a power supply connector.

Via the mini-USB port you can connect the device to a PC or Mac with the included cable. Using the USB connection, you can back up your recorded loops on your PC or use any one of the 99 memory slots to save your audio files as WAV. To use the device for live performances, you can transfer previously completed backing tracks to the gadget.

By the way, battery operation is not possible with the Ditto+. We found this to be a bit of a pity, especially because of the otherwise very mobile design, and we think this is a case of false economy. Another thing we didn't quite get is the fact that the matching power adapter for the Ditto+ is unfortunately not included in the delivery. You better plan on buying the power adapter for the Ditto+, otherwise you will only shake your head in confusion after unboxing the device.

Most likely the biggest advantage of the Ditto+ is how astonishingly simple it is to use, which was one of the reasons for the previous model to be one of the most popular Loop Stations in the entry-level segment. The Ditto+ has basically only one foot switch to activate recording and playback of the loop. Apart from the foot switch and the display, there is a single knob for regulating the volume and a back-and-forth button for selecting the memory slot on top of the device.

We found the extended loop feature to be quite convenient: If you would like your overdub to be longer than your original loop when recording and "Extended Loop" is activated, the length of the loop is automatically extended to the length of the overdub, but the Ditto+ does not use time-stretching for this, but instead copies the first recording and repeats it according to the new length until you stop recording.

You can activate or deactivate this feature by simultaneously pressing both arrow keys at the very top of the device and then confirming "YES" or "NO" via the arrow keys. You can see if the extended loop mode is activated by a small arrow pointing at itself at the bottom right of the display (just above the "progress bar").

By the way, if you press the foot switch to stop recording your overdub, the Ditto+ will automatically record to the end of the loop segment and not stop the overdub immediately.

Even though operating the Ditto+ could hardly be any simpler, TC Electronic didn't exactly cover themselves with glory in terms of documentation. There is no manual for the device, neither in paper nor digital form. Instead, the manufacturer only provided a two-page QuickStart paper that sadly leaves some questions unanswered.

Fortunately, the basic handling of the Ditto+ is mostly self-explanatory. However, how you're supposed to figure out how to activate or deactivate the extended loop feature by pressing the arrow keys at the same time, without looking it up online, is beyond us. But for challenges of this sort, we're here for you ;).

The Ditto+ by TC Electronic is a successful upgrade of the Ditto. Like its predecessor, the Ditto+ scores with its simple handling and practiced minimalism, with anything that could be called extra when it comes to Loop Stations has been cut out. If you're looking for a simple looper that doesn't annoy you with unnecessary bells and whistles, you should be thrilled with the Ditto+.

Compared to its predecessor, we particularly like the Ditto+'s added memory and handy display. Its true-bypass feature is, in our opinion, a big plus, which TC Electronic has continued in the Ditto+.

However, we weren't too excited about Ditto+'s overall design. We believe, the manufacturer went a step or two too far with regards to minimalism. Even though the Ditto+ is one of the cheaper Loop Stations, it is certainly not too much to expect a suitable power adapter and a reasonable manual for a device that can't run on batteries and costs more than £100. Forgetting about basics like this, is something we just can't understand.

If you can overlook these negatives, we can otherwise highly recommend the Ditto+ as a looper for experimenting at home, and the Ditto+ is also a good device for small solo performances. If you're not particularly strapped for cash, we can't find a good reason to stick with the old Ditto, as the new Ditto+ is an improvement in all respects.