The Big Brother of a Looper Classic

Most guitarists should be familiar with the Ditto Looper by TC Electronic or its successor Ditto+. We talked about both devices in previous reviews. In early 2014, TC Electronic added a larger version of the Ditto to its looper series - the Ditto X2. The X2 offers more features while maintaining the simple handling of the original Ditto. Find out how successful the Danish manufacturer was and whether the higher price pays off for you in today's review. 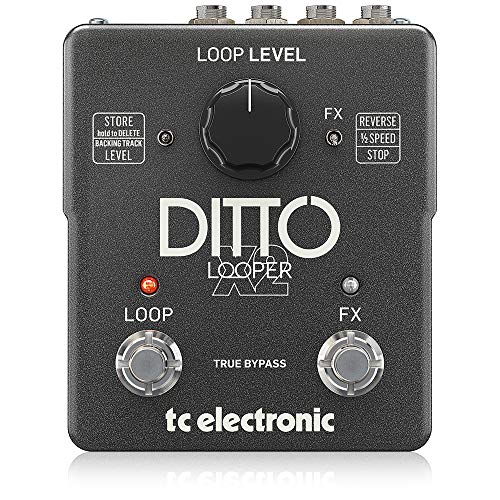 Measuring 13.5 x 11.3 x 5.4 cm and weighing 512 grams, the Ditto X2 is considerably bigger than the classic Ditto, but you could still justifiably describe it as compact. There is a good reason for the increase in size of the Ditto X2 as it has both stereo inputs and stereo outputs, providing guitarists or bassists with brand new options for cabling.

The Ditto X2 comes with the same 24-bit signal processing as TC Electronics' other Loop Stations. Thanks to true bypass functionality it loops the signals without changing them to the output when you are not using the looper. The X2 supports a maximum loop length of five minutes and unlimited overdubs.

Regarding the design of the casing, TC Electronic was looking at other Ditto loopers. The case is made of metal and appears to be quite robust. The Ditto X2's volume control is larger than the Ditto's, so you can efficiently operate it with your foot. The connections are not on the side of the X2 but on the front of the unit.

Besides the improved connectivity options, the X2 also comes with two loop effects, and you can jack up backing tracks via a USB connection to the PC. The unit has two footswitches. You can use the left one simply as a footswitch for the Ditto, while the right footswitch offers several features you can select via a switch on the unit.

By the way, the Ditto X2 does not have a memory management feature. You're only able to save a single loop using a switch, which is then immediately available the next time you switch on your X2. With the same switch, you can adjust the volume of the stored backing track by combining it with the volume control.

Looking at its ports, the Ditto X2 barely exceeds the essentials and therefore remains true to the simplicity of its smaller Ditto relatives. To be more specific, there are two inputs and two outputs as 6.3 mm jacks on the front of the unit. Both inputs and outputs can be used individually as mono connections or together as stereo connections.

Thanks to the extended connection options, you can plug in two amplifiers and two guitars simultaneously, e.g., in case you don't need stereo sound. So if you're a guitarist, you can use the X2 at the same time as your bandmate, but only one of you can operate the looper.

Apart from the inputs and outputs, the Ditto X2 has a micro-USB port via which you can connect the device to a PC or Mac to import or export tracks. It is also possible to update the device firmware via USB.

Otherwise, the unit only has a 9 V DC power supply connection, but the matching power supply unit is not included in the package. Unlike the small Ditto, however, you can also power your X2 with two 9-volt battery blocks that you can insert into a compartment on the bottom of the unit.

On top of the basic looper functionality, the Ditto X2 offers two separate loop effects. You can shift between them using the small switch to the right of the volume control. The first is a reverse effect recording or playing your loop backward. With the second effect, you can cut the loop speed in half. An exciting detail: You can also reverse the effects. You might, for example, record a difficult part at half speed and then play it back at double speed after reversing the effect.

As mentioned earlier, you can connect the X2 to a PC or Mac via USB. By doing so, the Loop Station appears as an external hard drive in the operating system allowing you to copy files to the device or your computer via Windows Explorer or via the Finder on a Mac.

The X2 supports WAV and AIFF, while MP3 files are only supported indirectly. You can copy MP3s to the unit, but it automatically converts them to WAV. While it's converting your files, the left LED on the X2 lights up red. The conversion process can take between one to two minutes, depending on the size of the file. In case of doubt, it may be quicker to convert the MP3 file into WAV format yourself with the right PC software.

To give something extra, TC Electronic collaborated with the website Jam Track Central to offer a package of preset backing tracks you, as an X2 owner, can download for free with the serial number of your device.

With their first Ditto-Looper, TC Electronic significantly simplified the handling of loopers for guitarists by focusing on all the basic essentials of the device's design and a product without anything a guitarist, who wants basic looper features lots of bells and whistles, doesn't need. In our opinion, TC Electronic was successful in its mission to keep the handling of the X2 simple, although the device comes with many more features than its little brother.

We actually found the X2 to be a little easier to operate than the original Ditto. This is mainly due to the second footswitch. Since the smaller Ditto only has one footswitch, you have to press the footswitch twice to stop the loop, which can sometimes be awkward. But with the X2, you can use the second footswitch as a stop button that you only need to press once. In our experience, this works much better and more reliably.

The X2's left footswitch controls the actual loop, while the right footswitch activates or deactivates the effect of your choice. The actual outcome of starting the FX footswitch depends on the position of the small toggle switch at the top right. You can switch it to one of the two effects, and it turns the footswitch into a stop button in the lower position.

Good to know: Since you can activate the two effects with the same toggle switch, we initially assumed that you could only use one effect at a time. However, this impression turned out as wrong. Fortunately, you can apply both effects to your loop one after the other using the toggle switch.

You can adjust the overall volume of the unit with the large knob in the middle. To the left, there is another toggle switch that you cannot click into place. If you hold it in the down position, you can use the volume control to adjust the backing track volume. You can also use the same toggle switch to save the loop by pressing the toggle switch up once. The LOOP LED will light up briefly several times. Now you're able to copy the recorded loop to your PC or Mac via the USB connection, e.g., to archive it or import it to your DAW. If you hold the toggle switch in the upper position for longer, the memory of the X2 is emptied.

By the way, the X2 also offers a (very hidden) option of changing the workflow of the unit from "record/playback/record" to "record/overdub/playback." For this, you have to loosen the screw of the battery compartment and remove the right battery. Underneath, you will find a small dip switch that you can flip with a toothpick. Even though the switching of the operating mode seems a bit unnecessarily complicated to us, it's pretty great that TC Electronic thought of the fact that not every guitarist prefers the same looper procedure with the Ditto X2.

Overall, we would describe operating the device as very simple and intuitive. You can look up a manual for the Ditto X2 online, but the looper is so easy to handle that hardly anyone will feel the need to read the manual in detail.

The Ditto X2 is a very easy-to-use Loop Station that is intentionally minimalist in design yet offers a little more "luxury" than the original Ditto looper. The unit has stereo inputs and outputs but remains compact and relatively lightweight at the same time. Since the unit can do more than the Ditto, you could expect the handling to be more complicated, too. But we didn't find this to be the case with the X2. On the contrary, the additional footswitch even simplifies the operation a little. The option of exchanging files via the USB port is a valuable addition to the functionality.

We can recommend the Ditto X2 to any guitarist looking for a looper that doesn't overwhelm you with complicated handling and many buttons but still offers all the basic features and even a few useful extras. If you can do without the second footswitch, the effects, and backing tracks, and can manage with a single input and output, then the conventional Ditto might be sufficient for your needs. If, on the other hand, you need battery operation, then the X2 is the right choice. 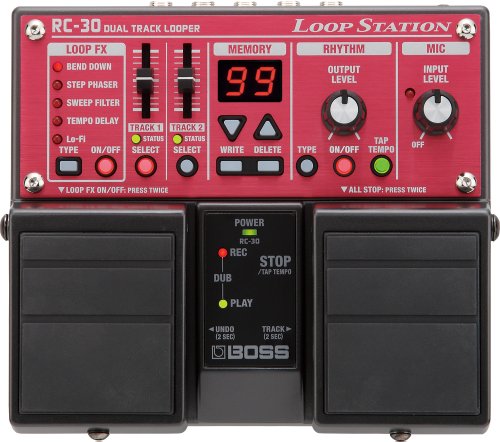 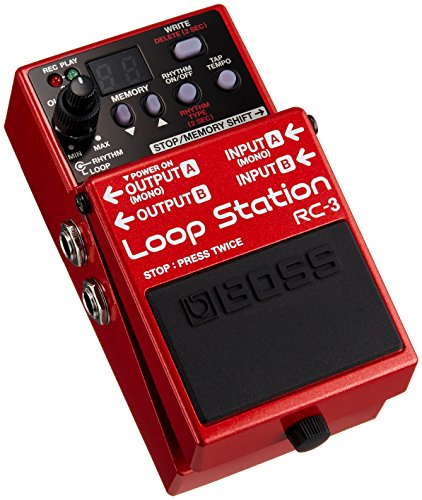