The Looperboard is the third professional floorboard presented by the manufacturer Headrush, which was founded only a few years ago. The company is part of the inMusic group, which is probably best known for its brands M-Audio, Akai, Alesis, and Denon. The Looperboard is a Loop Station offering an enormous selection of sophisticated features at a juicy price of 800 euros. Is this looper worth the money considering all the other professional loopers available for much less? Find out in our review! 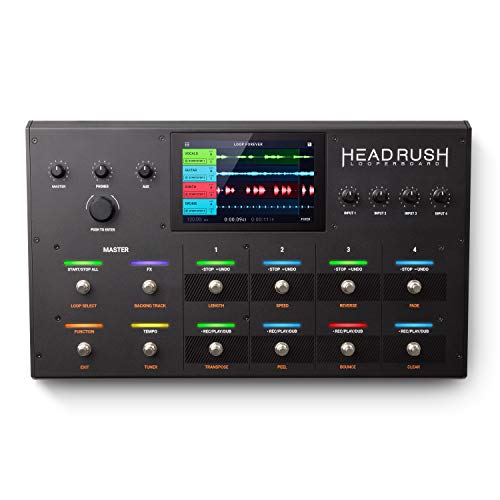 Headrush's Looperboard is neither small nor particularly light measuring 51.2 x 31.1 x 7.6 cm and weighing roughly 5.5 kg. But this comes at no surprise considering the many features that Headrush has included in this device. The Looperboard offers a generous 7-inch touchscreen as well as twelve footswitches with coloured LEDs. The signal processing is in 24 bit and a quad-core processor provides the device with a lot of computing power.

With the Looperboard you can record for an impressive nine hours of audio. Each loop can have up to four tracks, which can either be recorded simultaneously via the four inputs or individually one after the other. The loops can last as long as you like, and each track can consist of up to 99 layers, while the tracks can be separately controlled via the footswitches on the top of the unit.

By the way, you can use the Looperboard for more than just recording guitars. Headrush's device also supports keyboards, drums, and vocals including settings and effects. Effects? That's right, the Looperboard is not only a looper, but also offers numerous effects to adjust the sound to your own needs and desires. Guitarists, for example, will benefit from the seven-link effects chain with overdrive, delay, wah, and more.

The Looperboard comes with a wide selection of inputs and outputs. In addition to a small aux input jack, there are four rather unusual inputs, namely the XLR connectors with a large jack connector in the center. Looking at it that way, the device has eight audio inputs on top of the aux input, but because of the design you can use only four of them at the same time.

In terms of outputs, the Looperboard has two XLR connectors, which you can either use together as stereo outputs or individually as mono outputs. The same goes for the two large jack sockets next to them, which you can also use for stereo or mono. Apart from that, Headrush's Loop Station offers a headphone output coming as a large jack format.

Besides the classic inputs and outputs, the Looperboard has a MIDI input and a MIDI output that you can also use as a throughput connector. Just above the MIDI ports, you will find an SD card slot to basically expand the device's memory to endless extents. You can not only do this by using SD cards, but also by using a USB stick or a hard drive, for which two regular USB ports are available. In addition to the USB ports for storage devices, the Looperboard has another USB-B port functioning as a USB audio interface and you can also use it for firmware updates.

The Looperboard is expandable not only via MIDI, but also via an EXPR connector (large jack). You can connect external expression pedals to run various effect stations within the Looper. While the device also has a connector for the included 19 V DC adapter, the Looperboard does not support battery operation, but we didn't expect anything else considering the size of the device which also has a multi-core processor.

To put it in a nutshell, the Headrush Looperboard offers the following connection options:

When recording, the Looperboard displays all four tracks in a timeline on the screen including the sound waves. Combined with additional screens for setting levels and effects for the tracks, the software almost looks like a rudimentary digital audio workstation.

One feature we found the be very handy is that you can access each track directly via two footswitches on the device. The footswitches are arranged in two rows with the respective track number right above the columns. While the upper footswitch works as a stop and undo button, the lower footswitch can change between record/overdub and playback.

You can set the looper up to five different modes, each of which differs in the recording of tracks and the relationship between them. You can see which mode is currently active at the very bottom right of the display. If you want to change the mode, you can simply tap on this position. The following modes are available:

The looper is also capable of intelligent quantization and time-stretching to fit together the individual recordings. You can set the tempo of the song via one of the footswitches and you can also include a backing track.

Effects, Routing, and other Features

In addition to its classic looper functionality, the Looperboard comes with a wide range of included effects, which are divided by instrument type but can basically be used for any input. You can access the effects page by pressing the FX footswitch. You can assign the effects, which are called "FX Racks" on the Looperboard, to inputs or tracks. Each of these racks consists of an instrument-specific effects chain and can you can turn them on or off as needed by pressing footswitches 1 to 4. We unfortunately found there to be a few weaknesses here in terms of sound, which is why we only recommend those effects for practicing and otherwise rely on external effects. For a looper in this price range, this is a bit unfortunate.

On the other hand, we particularly like the fact that you can "wire" inputs, tracks, and outputs completely independently. To make use of this, the device offers a separate settings page for the routing, where you can adjust all corresponding settings. It is possible to route inputs directly to an output via "Dry Send" if any effects are to be bypassed. Here you can also conveniently set the volume and panning of the inputs and tracks. If you would like to connect two inputs or tracks to stereo, you can simply connect inputs 1+2 and 3+4 on the left side by flipping the relevant switch. In case you would like to listen to certain tracks with your headphones, while other tracks are output via XLR, the Looperboard can do that without any issues.

Another useful additional feature is the backing track player. As the name suggests, you can use it to play a backing track that you have previously made available on the Loop Station via USB or SD card. As is now common with Loop Stations, you can tune your guitar using a built-in tuner after activating it via the tuner footswitch on the bottom left.

We think the operation of the Looperboard is quite intuitive, especially because of the large touchscreen. The display provides a lot of compiled information without you having to constantly change the view. If you want to change what you see on the display, you can tap on the values and adjust them using the large rotary control on the left.

During operation, you can control the Looperboard mostly with the help of the twelve footswitches. The eight footswitches labeled 1 to 4 are normally used to control the individual tracks, but can also serve other functions when the device is switched to another mode, for example by pressing the Function footswitch. The coloured LED strip directly above tells you which function the footswitch currently performs.

For a device with so many features, we think the Looperboard is pretty easy to use. Headrush has done a good job here as the handling of the device is intuitive for the most part and you can access almost all of the setting options by pressing once or twice. We also like the fact that you can operate most things comfortably while standing with the footswitches.

In terms of documentation, Headrush fortunately wasn't sloppy despite the relatively intuitive operation. They provide an easy-to-understand, almost 50-page manual containing numerous helpful illustrations and actually explaining everything you need to know. The only lack we noticed is a tabular overview of all available effects.

The Looperboard by Headrush is a professional Loop Station coming at a premium price for premium features. We particularly liked the large touchscreen, which we've never seen in any other looper we've tested so far. We also very much enjoyed the presence of four independent tracks per loop with the corresponding equipment of physical inputs. The twelve footswitches make it possible to operate the device while standing, which is why the Looperboard is well suited to use it for gigs. We find the timeline view for the tracks very practical and would definitely like to see similar features on future devices from competitors.

The number of features on the Looperboard is so huge that it would've been impossible for us to go into everything in detail in this review, so we've limited it to what we considered to be the most important features. For the price of over 800 euros, you really get your money's worth with the Looperboard. In our opinion, the only minor weakness of the Headrush device is the quality of the guitar effects. If high-end sound is really important to you, you probably won't be happy with the effects of the Looperboard and should also plan to buy a good multi-effects device.

All in all, we can recommend Headrush's Looperboard to guitarists who want the center of their setup to be a Loop Station and are willing to pay a relatively hefty price. If you can do without that many footswitches or if you prefer to use additional MIDI hardware anyway, then you should also take a closer look at the Boss RC-505 or Electro Harmonix 45000. If, on the other hand, you prefer an absolute high-end Loop Station that you can operate almost completely in a standing up position, then you won't do anything wrong with the Headrush Looperboard, which you will most likely enjoy for a long time.